This past holiday season, the brightly colored paper lanterns that are unique to Christmas in Haiti were shining on three continents:  North America, Europe, and Australia.  This is remarkable, because in 2017, you could not even find them on the Avenue Panaméricaine, the traditional place where vendors sold the fanaux, as they are called in French and Créole.  In former years, hundreds of fanaux lit up that avenue between Pétion-Ville and Port-au-Prince.  The lanterns’ stained glass effect made the otherwise dark, treacherous, cliff-side road look like the inside of a cathedral.

Observing the fascination of hundreds of children walking by the display of fanaux we set up at the German International School’s authentic German Christmas Market in Mountain View, California or the Creekside Crafts Fair in San Leandro, CA, I can see why I returned to Haiti two decades later on a quest to find these lanterns.

I spoke to dozens of artisans in Pétion-Ville, Kenscoff, and Jacmel.  There was no shortage of talented painters, sculptors, metalworkers, and papier-mâché artists.  All complained sales were meager with so few tourists.  It took me some time to find a few talented artists, who were able to produce good prototypes and inventory for export.  Messaging each other through WhatsApp, I was able to collaborate with the artists to make prototypes while working in China this past spring and summer. We were working on lanterns inspired by buildings in Haiti and North America, while I was in Asia and they were in the Caribbean.  This could never have happened twenty years ago.

Unlike the Christmas decorations that are made all in one Chinese city by people who do not celebrate Christmas, these fanaux are completely handmade of recycled materials.  They are made by artists in their own homes, not factories.  Producing the fanaux is not polluting rivers or the air.  It is not creating more waste for landfills or the ocean.

However, there are reasons that China has done so well exporting its Christmas decorations to the rest of the world.  Factories are set up to mock up prototypes quickly, to schedule and produce inventory, and to get it out of the country.  And then there is the issue of price.  It is expensive to buy the materials to make the lanterns in Haiti. It’s even more expensive to ship them. Even getting them to the Dominican Republic, and shipping them from there, involves great expense and risk to a delicate product.

We designed the inventory to be shipped flat, and the lanterns came in pieces, which needed to be assembled. This enabled us to get them out of Haiti by air in time for Christmas without making them prohibitively expensive.  The first versions of the disassembled lanterns were, however, not the easiest to put together.  They required glue and a certain level of dexterity.  We learned a lot from these, assembling nearly thirty lanterns for display and demos.  In the future, customers will be able to assemble the Easter and Christmas 2019 lanterns with tabs and slots and no glue.  Assembly time will go down from about 45 minutes to ten minutes!

The first retail shop to carry our lanterns was the Cathedral of Christ the Light, a large and diverse parish of the Roman Catholic Church in Oakland, California.  When Michele Zaugg, the manager of the store, saw the ecclesial inspiration behind so many of the lanterns, she created a special display.  The fair trade gift shop, which already carries some Haitian crafts, showcased an array of lanterns inspired by churches and chapels, as well as typical gingerbread-style houses, for this large and diverse congregation. The congregation of the parish of Corpus Christi Church, also in Oakland, bought hundreds of them, supporting the Illumaison fair trade project.

While they may no longer adorn the streets of Haiti for Christmas, the traditional fanaux were seen all over this Christmas.  After being showcased at two crafts fairs in California, we took them to Europe to be viewed.  In order to find future markets for the fanaux, we travelled to Christmas markets in Cologne, Rudesheim, Bamberg, Wurzburg, and Nuremberg, Germany; Strasbourg and Riquewihr, France; Amsterdam, Holland; and Basel, Switzerland.

In the best German-style Christmas markets, the goods for sale are handcrafted.  These include as many figures as you can imagine for the Krippenstall, or nativity displays.  There are unique interpretations everywhere of the wooden Weinachtspyramide, a mutli-layered carousel with angels and other figures, powered by candles and a windmill.  Hand-blown glass tree ornaments and decorations made of natural materials are displayed in the Weinachtsmarkt stalls.

The closest things to the Haitian lanterns are the porcelain or clay reproductions of traditional houses in Holland and Germany.  In Holland, you put a little tea light in a blue and white Delft porcelain reproduction of the distinctive, high Dutch buildings with fanciful facades.  In Germany, there are colorful, painted clay houses that mimic the half-timbered houses of Bavaria.

Even with such beautiful manifestations of the Christmas spirit, the Haitian fanaux amazed people.  This Christmas, there may have not been many traditional Christmas lanterns in Haiti, but in places as far away as New York, Oakland, Melbourne, Edinburgh, Utrecht, Bamberg, and San Juan, people were experiencing the Haitian Christmas tradition.

Finding a Home for Haitian Crafts in European Christmas Markets

For Christmas of 2018, we traveled through Europe to look for homes for the Illumaison lanterns.  When I went to Haiti in November to pick up the inventory, many of the stores already had Christmas decorations.  In a country where there are so many beautiful handicrafts, it was sad to see that the stores were inundated with factory-made ornaments made out of synthetic materials.  This has been the trend world-wide, to import decorations–some admittedly, quite cute–from China.  In central and northern Europe, however, the Weihnachtsmarkts–Christmas markets, in German–have survived the centuries and are still thriving. In the massive markets of Amsterdam, Brussels, and Edinburgh, you still come across a lot of inventory that is mass-produced.  Travel into the heart of Germany, eastern France, and Switzerland, however, and the markets are dedicated to beautiful, handmade products.  Surprisingly, the handicrafts are all moderately priced, locally produced, and reflect the specific culture of each town and region.

We splurged for the first week, and took a guided tour down the Rhine with one of the best river cruise lines, the AMA Waterway.  AMA, like Viking and Avalon, has a number of themed cruises that go down the Rhine, the Main, and the Danube Rivers hitting many of the most beautiful destinations.  After a great deal of research, we booked the last room on a cruise that set sail from Amsterdam in the middle of December and ended in Basel, Switzerland.  The Danube has its share of charming markets, set in magisterial cities, like Prague and Vienna.  However, the Rhine and its tributaries connect the Germanic cities that, altogether, are the heart of Christmas.  The prevalent architecture, the half-timbered house, or Fachwerk Haus (auf Deutsch), is the coziest possible architecture, immediately calling to mind the fairy tales of childhood. 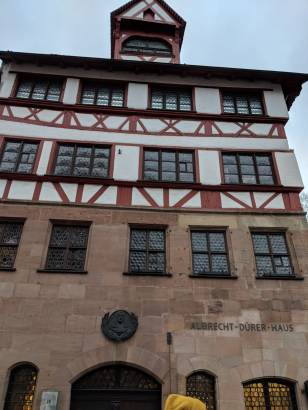 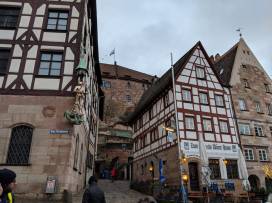 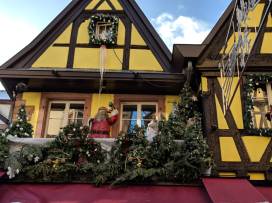 Before we went to Europe, we had a taste of the German market in Silicon Valley.  We participated in the German International School of Silicon Valley‘s annual Weihnachtsmarkt in Mountain View.  Set up largely by German expats, it is as authentic as you can get.  As on of the organizers said to me, if you squint enough to blur the palm trees out of the background, you could be in Germany.  And, indeed, that was true.  Most of the activity centered around the many booths offering German food and drink, but there were also quite a number of booths selling handmade products. 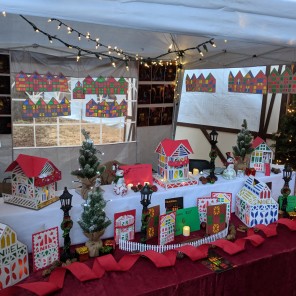 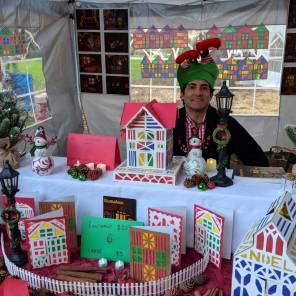 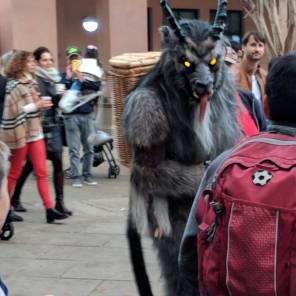 There were performances and singing during the day.  One of the sweetest parts of it was a petting zoo with adorable goats, pigs, lambs, rabbits, chickens, and other animals.  Although the market opened in the morning, it was at sundown that it looked especially beautiful, with twinkling lights, and our own booth’s sparkling Christmas village.   Their Facebook page faithfully captures the spirit of a “Frohe Weihnachten.” 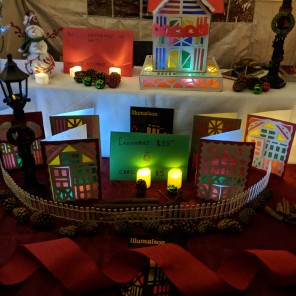 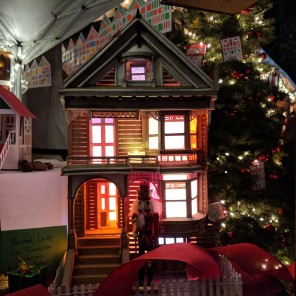 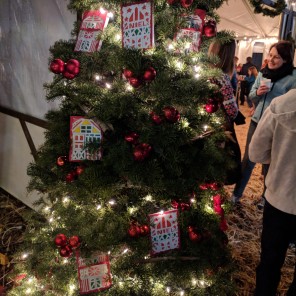 As you can see, Illumaison made a spectacular debut in the South Bay area, captivating children and amazing adults.  Even before we crossed the Atlantic, we had international customers buying our fanaux to take to the United Kingdom, Europe, and Asia.

View all posts by author